with Àlex Sanz as a Prince H.

From Barcelona, a young Institut del Teatre actor – Alex Sanz has spent an intensive period in Elsinore (Denmark), working with the writer and director of the play- Lars Romann Engel and the Polish actor Jaub Snochowski.  During this time 2 new language versions ( Catalonian and Polish) of Prince H were created, as the network develops this exciting project which we hope will extend across most members.

Prince H aims at reaching schoolchildren and teenagers. Its idea is to tell the story of the young Hamlet from a young and modern point of view. 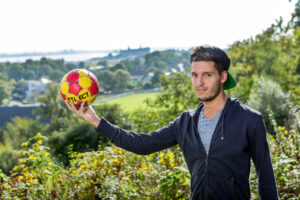 Left or right? The play is grounded in the fact of having to take decisions. The story of HamletScenen at the Kronborg Castle (Elsinore) is inspired by William Shakespeare, who created this dramatic universe that plays around with questions of identity, existence and opinion.

The format of Prince H.Universe – a talk show which is both play and discussion makes a new cultural heritage by developing a common language to talk about the identity and formative process of modern man. Everything takes form from the way we talk. Language is power. The language controls the way we perceive ourselves and how we see others and the world. The language generates the acting options that we see; that is why “Príncep H.Univers” is a discussion/play that interacts with the audience.

Right or left? All lives are formed by decisions. Options grow exponentially while rules and common values crumble. Changes have a basic condition. We cannot give a definitive answer to anything. To develop ourselves as human beings we need to be in touch with our feelings.