The Gdansk Shakespeare Theatre has finally opened on 19th September !

And what an opening it was! Acrobats flying in the air above the theatre’s open roof, a splendid gala inside the theatre with the Polish and international VIPs including the Polish Prime Minister, Donald Tusk and the British ambassador, Robin Barnett and a triumphant march by hundreds of the citizens of Gdansk through the theatre, accompanied by Shakespearean characters.

The Gdansk Shakespeare Theatre is the first purpose-built theatre which has been built in Poland in the past 40 years. It is a theatre that is one of a kind, with its opening roof which allows for performances with natural daylight. It has taken almost twenty years to realise Prof Jerzy Limon’s dream. His great achievement, which has been made possible by an army of enthusiasts, sponsors, and politicians and with thanks to combined EU and Polish government funding, has been rightly celebrated on September 19th. 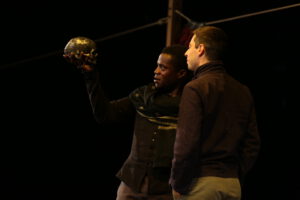 On the next day, September 20th the first season of the Gdansk Shakespeare Theatre opened with the touring production of Hamlet by Shakespeare’s Globe from London, directed by Dominic Dromgoole. The British travelling actors stayed for four days and performed to sold out auditoria and standing ovations. Their Hamlet inaugurated British Week, a series of events devoted to British culture including a comic one-man show, I, Malvolio by Tim Crouch, a dance and physical theatre performance, Missing by Gecko Theatre and a Polish adaptation of Friedrich Schiller’s Mary Stuart. The British week at the Gdansk Shakespeare Theatre was accompanied by a British film retrospective, concerts and exhibitions.