The Gyula Castle Theatre operates in the court of the only gothic brick fortress that has survived in Central-Europe.

Between 3rd – 13th July 2014 the guests will be entertained with great variety of performances which are available not only the court of the fortress that is turned into a theatre, but also on the nearby lake-stage and on stages set up at different places around. Festival opens with new production of “Midsummer Night’s Dream”, one of the most popular Shakespeare’s comedy directed by David Doiashvili. As in previous editions, this year will be enriched with variety of musical performances basing on Shakespeare’s work like concert of the W.H. band by Sena and Akkezdet Phia Süveg Márk „Saiid” – Hungarian slam poetry champion.

This year we are celebrating 450th anniversary of Shakespeare’s birthday. On this occasion film ”The Shakespeare mystery ”will be screened.

Worldwide famous theatre companies like Shakespeare’s Globe from London with “Much Ado About Nothing” or directors such as Luk Perceval with “Macbeth” can not be unnoticed. Those will be part of Shakespeare Fringe Festival which starts on 10th June.

On July 11th -12th an international conference will take place with a guiding question-“Is Shakespeare Still Our Contemporary?” 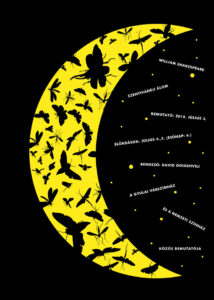