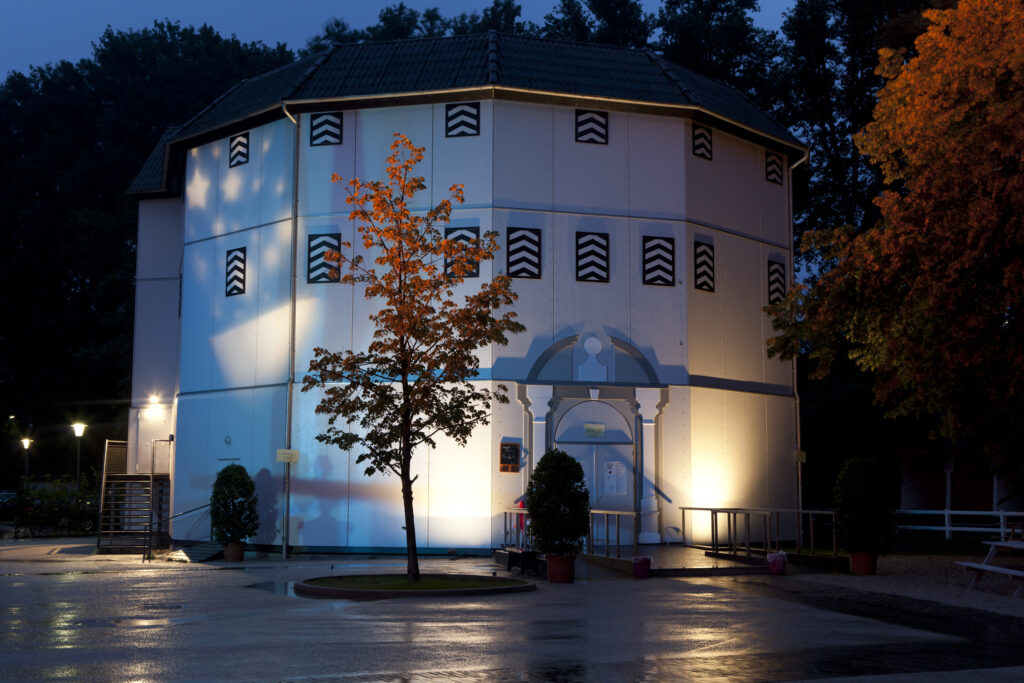 Even  400 years after his death Shakespeare is more alive than ever, and nowhere more so than each summer at the Shakespeare Festival in the Globe Theatre, Neuss. Between 27 May and 25 June 2016 the programme will include 43 performances from 14 companies from England, France and Germany. Whereas the previous festivals have always sought traces of Shakespeare in exotic places, this year’s festival, titled „Shakespeare and beyond”, will instead concentrate on  seeking out the effect that his subjects and motifs have had on younger authors and other media. So the festival begins with Shakespeare goes Varieté, in which his multiple facets will be illuminated by much humour, magic, poetry and music. Under the direction of Daniel Finkernagel, the honours will be shared by Corinna Kirchhoff, the Asasello Quartet, the Signum Saxophone Quartet and the illusionist Sascha Simon.
Woody Allen’s A Midsummer Night’s Sex Comedy will be staged by the Potsdam Poetenpack, and the bremer shakespeare company will perform not only As You Like It but also Friedrich Schiller’s Scottish drama of two queens, Maria Stuart.
A further highlight is devoted to Shakespeare and music: in To touch – to kiss – to die, the internationally renowned counter-tenor Valer Sabadus and his ensemble will trace the baroque life cycle of longing, love and death in immortal songs by Henry Purcell and John Dowland.
Making its first guest appearance at the Globe, Neuss, is Claus Permann’s famous Berliner Ensemble, joining forces with the Hochschule für Schauspielkunst „Ernst Busch” drama school in an imaginative and zestful production of Two Gentlemen of Verona. Also from the German capital comes the Berliner Shakespeare Company with a magical „Winter’s Tale!”.
The Rheinisches Landestheater is sandwiching its production of Richard III between political intrigue and erotic arts of seduction, courtesy of Bea von Malchus, with her stunning solo performance of Henry VIII, and the French Compagnie 13 with The Merchant of Venice (Le Marchand de Venise).
From England, Mountview Productions brings Julius Caesar, produced by the successful young director Polina Kalinina, the Flute Theatre gives an exciting modern version of Hamlet, Patrick Spottiswoode gives his now legendary lecture „Shakespeare and the Globe”, and Bristol’s Shakespeare at the Tobacco Factory brings the festival to a close with All’s Well That Ends Well.
A production commissioned for the first time by the Shakespeare Festival gives children from the age of six the chance of a great theatrical experience. In simplified language, and with the plot of „The Tempest – or The island of magical beings” reduced to essentials, the Seifenblasen-Figurentheater puppet theatre tells the story of Prospero, his daughter Miranda and the shipwrecked company. The ten performances take place in the Globe’s Wetthalle. A broad-based educational offering for school students and their teachers rounds off the celebrations of this jubilee year.