Thirteen productions from Spain, England, Hungary and Germany, together with inspiring lectures by Patrick Spottiswoode and an accompanying programme of enticing music: such are the ingredients of the 24th Shakespeare Festival which this year celebrates the 450th birthday of the Bard from Stratford-upon-Avon . Festival continues from 19th June till 19th July 2014 and is filled with Productions such as The Tempest from the Rheinisches Landestheater, As You Like It from the Shakespeare Company Berlin, and three offerings from the Bremen Shakespeare Company: a birthday celebration entitled „All’s Will that ends Will”, the rarely-seen Pericles, Prince of Tyre and Richard III. 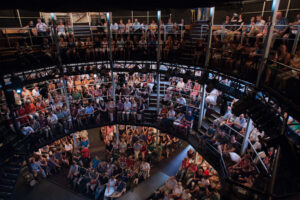 The Propeller Company performs in English, with a magical Midsummer Night’s Dream, the Comedy of Errors, and a sparkling Much Ado about Nothing from London’s Globe Theatre on Tour. Budapest’s contribution is a modern adaptation of Coriolanus, while the Fundación Sigio d’Oro from Madrid brings two plays by Shakespeare’s great Spanish contemporary Lope de Vega (1562-1635): the slyly humorous tale of jealousy El Perro del Hortelano (The Gardener’s Dog) and the drama El Castigo sin Venganza (Punishment Without Revenge).

Katharina Thalbach brings to the Neuss stage a high point in world poetry with „Wie er uns gefällt” (As we like him). In her readings this great actress conjures up the spirits of Shakespeare’s characters from the perspective of 400 years of poetry. The actor Gustav Peter Wöhler and the Lautten Compagney devote a musical reading to the somewhat rakish English diarist, Samuel Pepys (1633-1703). „Inspired by song” is a recital by the internationally-known recorder player Stefan Temmingh, soprano Dorothee Mields and the Gentlemen’s Band, and the festival draws to a close with a new edition of Caroll Vanwelden’s „Shakespeare in Jazz”.

A wide-ranging specialist educational programme is offered as part of the festival to school students, teachers and anyone interested in the theatre.